Andrew Charleson is a British actor, voice talent and artist. He also uses Camtasia 8 to make screen-capture and marketing videos.

Acting.  His theatre, television and film credits are here along with current info and biography details, photos and clips.

Art.  Conceptual media art, abstract painting, soundscape and performance.  Andrew has a Master’s Degree in Fine Art from the University of Kent. Online portfolio at fipps.co.uk.  and at andrewgallacher.art

Andrew was last on stage in the West-End playing Robert Crosbie in Somerset Maugham’s “The Letter” with Anthony Andrews and Jenny Seagrove.

Reviews for ‘The Letter ’ – Wyndhams Theatre

“One of the best performances comes from Andrew Charleson as the hapless, cuckolded husband, Robert. His well-meaning doltishness and unthinking love for his wife is touching and the actor brings a moving subtlety to the part.”

Andrew spent two years as ‘The Right Honorable Gerald Bolingbroke’ in the West End production of ‘Me and My Girl’ at the Adephi Theatre, singing and (believe it or not!) tap-dancing his way through ‘The Sun Has Got His Hat on’ for over 800 performances.

He spent a memorable season in Scarborough being directed by Alan Ayckbourn in his trilogy of plays ‘The Norman Conquests.’

Reviews for ‘The Norman Conquests’ – Scarborough

“…and Andrew Charleson’s hesitations as Tom, his timing of the stirring of a cup of tea, are classic comic acting.”

Other Theatre credits include tours of ‘Breezeblock Park’ and ‘The other Side of Chris Barrie’, playing Jack in ‘The Importance of being Earnest’ in Oxford and Touchstone in ‘As You Like It’ at Regents Park.

He played Del-boy’s Dentist in  ‘Only Fools & Horses’

This is a little clip of me playing Del Boy’s dentist in a Christmas special called ‘Fatal Extraction’.  David Jason was great to work with. He was generous, helpful and funny… I was terrified of actually sticking him with the very real and very sharp syringe needle! This episode originally aired December 1993. 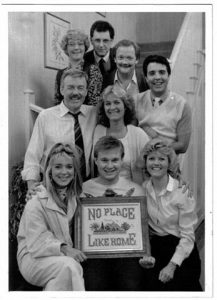 His first job on television was taking over from Martin Clunes as Nigel in ‘No Place Like Home’ for the BBC.

He has appeared in various TV programmes. Credits include ‘A Line in the Sand’, an adaptation of ‘Othello,’ a stint in the channel 5 soap opera ‘Family Affairs,’ ‘The Bill’ ‘Best of Both Worlds’ ‘All Along the Watchtower’,  Lynda La Plante’s ‘Supply and Demand’,  ‘This Life’ ‘Next of Kin’ ‘Crime Limited’ ‘Family Life’ ‘Rough Justice’ ‘Seekers’ ‘House of Elliot’ ‘Memento Mori’ ‘Stay Lucky’ & ‘Lazarus and Dingwall’.

He filmed a small scene with John Cusack in the Hollywood Movie “Shanghai”.

This is a little clip of me playing opposite John Cusack & Li Gong in ‘Shanghai‘. This was a long day, about 16 hours on set. The last day of filming on the massive Shanghai backlot. John Cusack was polite, professional and very very tired!  Filmed in Bangkok 2008

He has worked as an actor in the UK and around the world for the past 30 years. His voice work has included radio, commercials, corporate training, videos, tourist guides, audiobooks and info-products.

His client list is long and diverse, ranging from the Miho Museum in Japan, through Madame Tussauds and the BBC in the UK and includes being the voice of Playboy TV UK for two years!

Walk-through and tutorial for BuyersBillboard.co.uk. – These are Camtasia tutorial videos and voice-overs recorded and produced from the client’s basic script.

Pounding Down Your Door (2017) made for degree show – MA Fine Art, University of Kent – Shown at Reverberate and 51/Zero  Film festival.